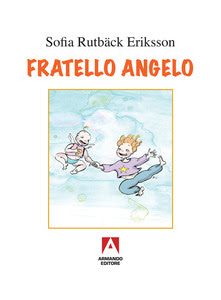 D-“Fratello Angelo”  , your latest book, is a profoundly psychological fairy tale, the fantasy – realm of the child – whose world is privileged to you – as a writer for children’s literature, has the power to generate – so to speak – a true living memory?

Yes, I would definitely say that the imagination of children has been a great influence for me. It was actually my son, who was 3 years old at the time, who gave me the idea of the book. He had recently lost his brother Alfie and pretended to go to heaven and visit him. He also played that his angel brother was here with us, and that he was a super hero. I believe that as a writer, you shouldn’t be afraid to write about sadness, loss, grief as well as imagination and games about a lost person. We should let children be children, let them use their imagination, and process loss in the way the want. The memories of people that we have lost could be used as a strength. I am actually happy that we got to have Alfie, although I would have liked to keep him forever. Sometimes I think that if I can survive without him, I can actually do anything!!

Q- More generally – as a writer – to which Nordic authors do you also refer?
One of my favorite writers is of course Astrid Lindgren and especially her story “Mio min Mio”, where the whole story in my opinion could be seen as “another World”, is it heaven? Or is it imagination? Or is it an adventure? I love it.
Q- Your book is also a special fairy tale, since the dedications, “every human has a twin Brother Angel?

The book is of course special since it reminds me of our son Alfie who died in May 2016. Of course it brings back sad memories but also the happiness of having had him, even for that short time. In a way I love working with the book Fratello Angelo, because I feel closer to Alfie. I also really hope to help other families who have lost a child. I think that if you have a book to read, it’s easier to talk about the sadness and the loss. I also want to show children that it’s ok to play games and use their imagination. In a way, I think that the book also can be seen just as you write, “every child has an angel brother”, like we can all find strength in different places. Some have religion, some have lost ones who give them strength and others have friends and family in their life who help them get through the day.

Iscriviti a questo blog per ricevere i post più recenti.